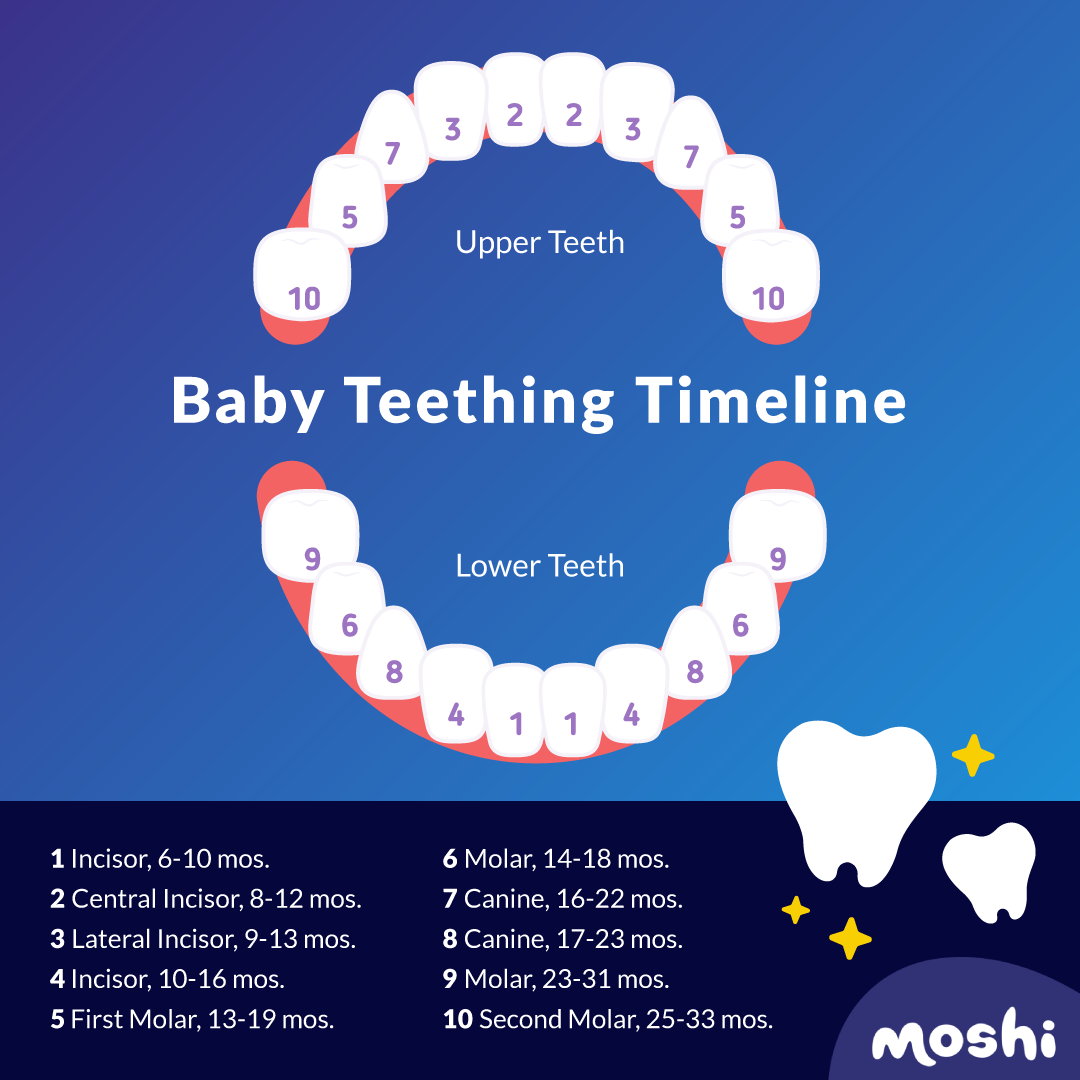 How Long Does Teething Last? A Timeline For Parents

Few milestones can simultaneously fill parents with both excitement and dread, and if we were to be honest, teething might top the list. The appearance of your baby’s first teeth can be a watershed moment, but it can also be painful — for everyone. When those little buds begin to erupt, and your little one is dealing with swollen, itchy gums, you can be sure that there will be plenty of tears and irritability in equal measure. From the moment teething begins, no doubt parents find themselves asking how long does teething last?

Ahead we’ll take a look at the timeline for teething and what you can expect along the way:

Your child is born with 20 teeth in their jaw. According to Dr. Joseph Salim, DMD, “baby teeth begin their formation in the uterus by the sixth month of gestation. At birth, the first element of these teeth, as well the first permanent molars, are present.” Divided into: 4 incisors, 2 canines, and 4 molars for each arch, these teeth are also known as milk teeth or deciduous teeth, and over the course of the next 33 months, those teeth will (not so quietly) make their way to the surface.

Dr. Salim notes that teething is a dynamic process. “Physiologically, there is a first teething phase, through which the baby teeth emerge. This stage lasts until children are 3 years old. A second phase then follows, which leads to the completion of permanent dentition that will last a lifetime.”

“Many parents believe that since “milk teeth” are destined to fall out, they do not need the same level of care as permanent teeth, and doing so is, therefore, a waste of time. However, it is essential to ensure that young children learn good oral hygiene habits and regularly see a dentist after they turn 3. Despite their limited life span, the care of baby teeth is very important, for they are preparatory in anticipation of permanent teeth. Baby teeth have a direct influence on the oral cavity’s future health.”

Incidentally, The American Academy of Pediatric Dentistry (AAPD) recommends that your child see a dentist when their first tooth erupts or the latest at the one-year mark.

How Do You Know When Your Child is Teething?

By the age of 3, all 20 baby teeth will be in place, but it’s worth noting that much of that activity will occur before your little one is able to communicate verbally. In that case, parents generally have to rely on reading symptoms and their own intuition if they think their baby is teething—common signs of teething include:

Although the process of teething lasts for a few years, the symptoms commonly associated with teething generally last for a few days at a time. If your child is having a particularly rough go of it, there are plenty of natural teething remedies you can use to soothe sore gums and help alleviate their pain and discomfort.

When your child is in the throes of teething, it could feel like there is no end in sight. Rest assured, though; it won’t last forever. Here’s a timeline to help you put things in perspective:

While some babies may begin teething as early as 4 months, teething normally starts with the lower central incisors (or the middle teeth on the bottom) at 6 months and ends with the appearance of the second molars somewhere around (or just beyond) the two-year mark. Your baby’s teeth will usually appear in pairs, and once the incisors get the ball rolling, you can expect to see new pairs of teeth every two months or so.

You’re in the home stretch. Your child’s molars will be among the last to show up to the party, and these final teeth will mercifully make their appearance around the two-year mark. After the appearance of the first molars, you can expect their second molars to come in anywhere within the next year. It’s worth noting here that while the molars are the last teeth to come in, they are bigger than other teeth, so they may also be the most bothersome and painful for your child.

When it comes to teething, the only way around is through. The important thing to remember about teething is that it’s just one stage of your baby’s development, and it won’t last forever. Familiarizing yourself with common teething symptoms and knowing what to expect can help dial down the chaos and really make a difference for both you and your baby.

Sharon Brandwein is a writer specializing in all things parenting. Her work has also appeared on ABCNews, Motherly, and, Scary Mommy, and Parents. When she’s not busy curating a wardrobe for her puppy, you can find her writing about motherhood, among other things, on SharonBrandwein.com, and of course right here on Moshi.